Doggiebox 2.1 (released 12 February 2021) includes a slew of long-awaited under-the-hood improvements to once again support the latest MacOS and newest Macs.

Songs and drum kits now track their related files in a sandbox-compliant manner. You may be prompted to locate a drum kit the first time you open an existing song.

Released 22 August 2011, Doggiebox 2.0 is a significant and long-awaited update that brings a number of new features, improvements and bug fixes. Read about upgrading from Doggiebox 1.x, or download now.

The following sections describe the highlights. If you are upgrading, you will find that a number of things have changed. 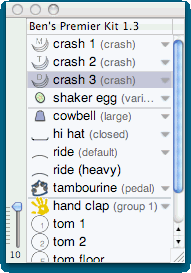 A number of lesser details have changed slightly, which might be of note if you are upgrading from Doggiebox 1.4.3.

In addition to the above, a numerous assortment of other bugs have also been fixed.

I'm floored! This thing is great! I've been looking for a way to have my computer help me learn drumming. This is already the best thing I've seen. —Steve K.